Controversial Pandemic Protests: Past and Present

Now that the year 2020 is almost over, it’s time to analyze trends in civil unrest and the many claims that have been made about them. We’ll start with civil unrest surrounding the COVID-19 pandemic. There have been claims that this unrest is unprecedented; that pandemic related protests are reactions that society has not commonly defaulted on in response to something like this. 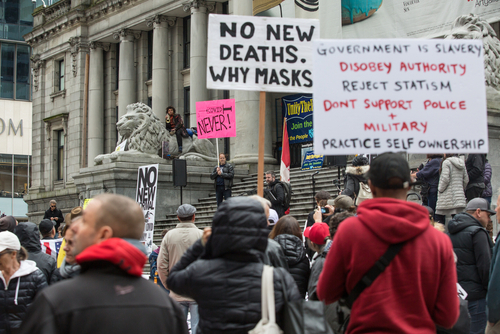 I have always doubted this claim, as civil unrest is used by society to voice opinions and policy feedback, I find it hard to believe that it’s unprecedented. So, as always, I did some research to try and back up my claim – to prove that reactionary protests are something that can follow pandemics.

The research was not solely done to prove myself right, it was conducted to refute a claim that could damage our understanding of how the world reacts to something as life altering as a pandemic. Claiming something so bold as “unprecedented” could alter our understanding of how society operates and reacts to certain catalysts. As a security analyst, I think it is important for us here at Riley Risk to properly understand how society reacts to a multitude of triggers, as COVID-19 is not an isolated incident, and when similar events occur we will be equipped with the correct understandings.

Throughout my research I was able to refute this claim of precedence. While the COVID-19 related protests have certainly been large scale, they are not the only ones of their kind. History has presented us with other civil unrest trends, so I have decided to compare and contrast one stand out event with this year’s events.

You may not be able to recall the Smallpox Riots of 1894, unless perhaps you’re a Milwaukee resident. In the late 1800’s the city of Milwaukee, Wisconsin, was presented with its last of many smallpox outbreaks. However, unlike the previous outbreaks, the reaction by society would be one of violent unrest. Although it was the shortest outbreak the city had been confronted with, it would prove to be the most memorable. The unrest began with accusations that the smallpox isolation ward was mistreating the patients it housed, and that the ward was actually responsible for the spread of the disease, which was concentrated in the South Side area of the city. The South Side was lower income, and so many claimed the Health Department forgot about residents in the midst of the epidemic because of the lower social status of these residents. With this unrest there was a clear enemy for the citizens of the South Side: the Health Department. The breaking point for the protesters was when police attempted to remove a child from his home to the isolation ward. This occurred on August 5th, 1894, when 3,000 residents armed with crude tools surrounded the boy’s house, and physically attacked police officers who attempted to remove him, threatening to overturn the ambulance the police had brought with them if they tried to strip the boy of his comfort.

More fuel was added to the fire when a social leader, Alderman Robert L. Rudolph, from the South Side area began to give speeches against the Health Department, especially against health commissioner Walter Kempster. More violence began to break out, even though the Rudolph did not endorse violence in his speeches. 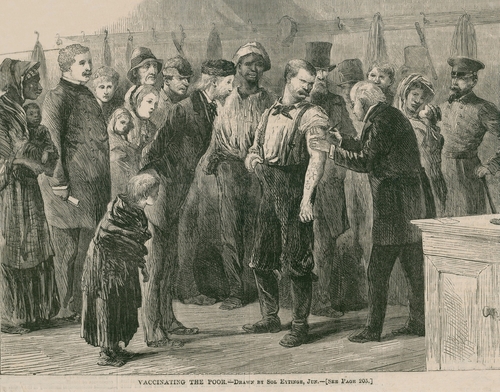 Nonetheless, clashes broke out between police and rioters, which resulted in injuries (there were claims in newspapers that there were some casualties, but these have not always been supported by evidence). The outbreak ended as quickly as it began, officially ending in 1895, and the reaction of the residents caused the removal of Kempster as commissioner. However, this decision did not last long, and after the epidemic was officially over Kempster was reinstated.

There are some clear differences between the Smallpox Riots and COVID-19 related protests. The majority of COVID-19 related protests are not as violent as the Smallpox Riots, though there have been isolated incidents of violence. There is also no one social leader who behaves as a catalyst for more unrest- however, it could be said that social media now operates as that “social leader.” However, there are an overwhelming amount of similarities between the two movements. In particular, the themes spurring the initial unrest. Recall that smallpox unrest broke out after accusations of mistreatment while in hospital facilities, and then the refusal to comply with police mandated restrictions as to where people can go. While in the case of the Smallpox Riots this concerned where patients could and couldn’t be, we are also seeing similar discontent in 2020. Many protests across the globe have been concerned with movement related restrictions imposed upon countries in an effort to control the spread, which can be summed up as “police mandated restrictions as to where people can go.” These are the core themes of both movements, and while they may not literally translate in both cases, the essence of the theme remains in both. COVID-19 related protests are not a one of a kind phenomenon, as I proved in the first installment of this series civil unrest is a common occurrence around the world, so it would make sense to see just one more way for civil unrest to show its head in society.

Perhaps we can hope that, like the 1894 smallpox epidemic, the COVID-19 pandemic will also be over as soon as it begins. But until then we should be paying attention to these similarities. Many credit the reactions during the Smallpox Riots to a lack of trust in the growing science of public health. This may be true, and could even explain some protests related to COVID-19. Better understanding of trends can help security analysts like myself; if more protests movements begin that mirror others that occurred in the past, then knowing the trends in the past can help “predict the future,” more or less. We humans are creatures of habit after all. Here at Riley Risk we take the time to better understand these trends so that our data and intel is as up to date as possible, and from this we are able to give clients exactly what they need to succeed. There is little that occurs these days that is unprecedented, and for this we should be thankful. The answers to how we behave in the present typically can be found in the past.